Silence is in the air. As another Black Father takes a pause. The audience “can’t breathe” as the room remains silent. A tear is shed. Heads are shaking. A crushed father. The Founder of Tha Brown Urban Mother Partnership “Tha B.U.M.P.” sat with a room crowded with Fathers.

John Jay College of Criminal Justice was buzzing on a warm June Saturday afternoon. A panel of fathers standing to share how they were and is treated in the land of the free, the home of the brave. He stands giving testimony and validating that life, liberty, and the pursuit of happiness is not an inalienable right for all.

Malcolm X said, “The media’s the most powerful entity on earth. They have the power to make the innocent guilty and to make the guilty innocent, and that’s power. Because they control the minds of the masses.” The fathers agreed that the media is playing a dishonorable role in not depicting Black Fathers and only showing the mothers. Uncle Bobby said, “Everyone of us have a voice and the media is trying to veto our voices.”

Every dad and son who stood said they were called a “Nigger” by a police officer. They tried to make sense of why their son and father were fatally shot by the police. All sharing– felt like they were treated unfairly and became a culprit to the police criminality. Their questions were not answered. Coroners  who clearly wanted to speak but, were silently gagged by sever consequences if the truth was divulged. Sympathy was a demon. “They treated us better when we were enslaved and made money for them,” said one Father. “Keeping their pockets loaded,” chimed in a spectator.

Kenneth Chamberlain Jr. the son of Kenneth Chamberlain Sr. shared that he had to remind the police, “You are dealing with an intelligent Black Man and I know how to fight you.” On a chilly November morning at 5:25am. When White Plains officers demanded that Mr. Chamberlain Sr. open his door. They called him a nigger as well. A former Marine who had heart problems and wheezed if he walked more than 40 feet, triggered his medical alert system pendant. When he refused to open the door they called him a “nigger”. Fatal events took place after resulting in Mr. Chamberlain Sr. being pronounced dead.

Uncle Bobby the Uncle of Oscar Grant said, “The most vulnerable is our children. One of the reasons why the police are so hard on our youth is because individuals know the influence of black youth on other youths.” Uncle Bobby reminded the listeners that our Black youth are being watched and preyed upon. Oscar Grant’s journey was the podium for the film Fruitvale BART Station. BART Police officers detained Grant and several other passengers on the platform at the Fruitvale BART Station. Officer Johannes Mehserle and another officer were restraining Grant, who was lying face down and handcuffed. Then Mehserle drew his pistol and shot Grant once in the back stating that he thought it was his taser.
Andrew Joseph III father Andrew Joseph Jr. chimed in, “There is more preying going on in the court house and less praying going on in the church house.”

Jordan Davis father Mr. Ron Davis advised a young man by saying, “I am asking you to become and inspire to become a judge. The judges are who make a much greater difference. I thank Judge Healley today!” A young spectator in the room stated that he wants to become a police officer. Many frowned at him and gave him discouraging words. Black Westchester interrupted and encouraged him to get a group of friends and make a pact. He needs a group who are willing to become police officers, lawyers, and judges. This way when you walk into the court room you have a shoulder to stand on. Encouraged to become an officer and do it the right way.

Jordan Davis was shot and killed on November 24, 2012 at a gas station in Jacksonville, Florida at the age of 17 years old. Michael David Dunn, a 45-year-old from Brevard County asked Davis and his companions to turn down the music.
Dad paused and asked, “Did he have to kill Jordan Davis?”

How do you feel about the criminal justice system? One guest said, “The concrete needs to be broke up and a new system poured!”

All in attendance were encouraged to make a change. Each father and son wants all to share what was discussed and build our youth. To become a part of the fathers journey please check their “Love Not Blood Campaign” at Love Not Blood Campaign With Love ❤️ Cynthia #nojusticenopeace #lovenotbloodcampaign #thabump #kennethchamberlain #jordandavis 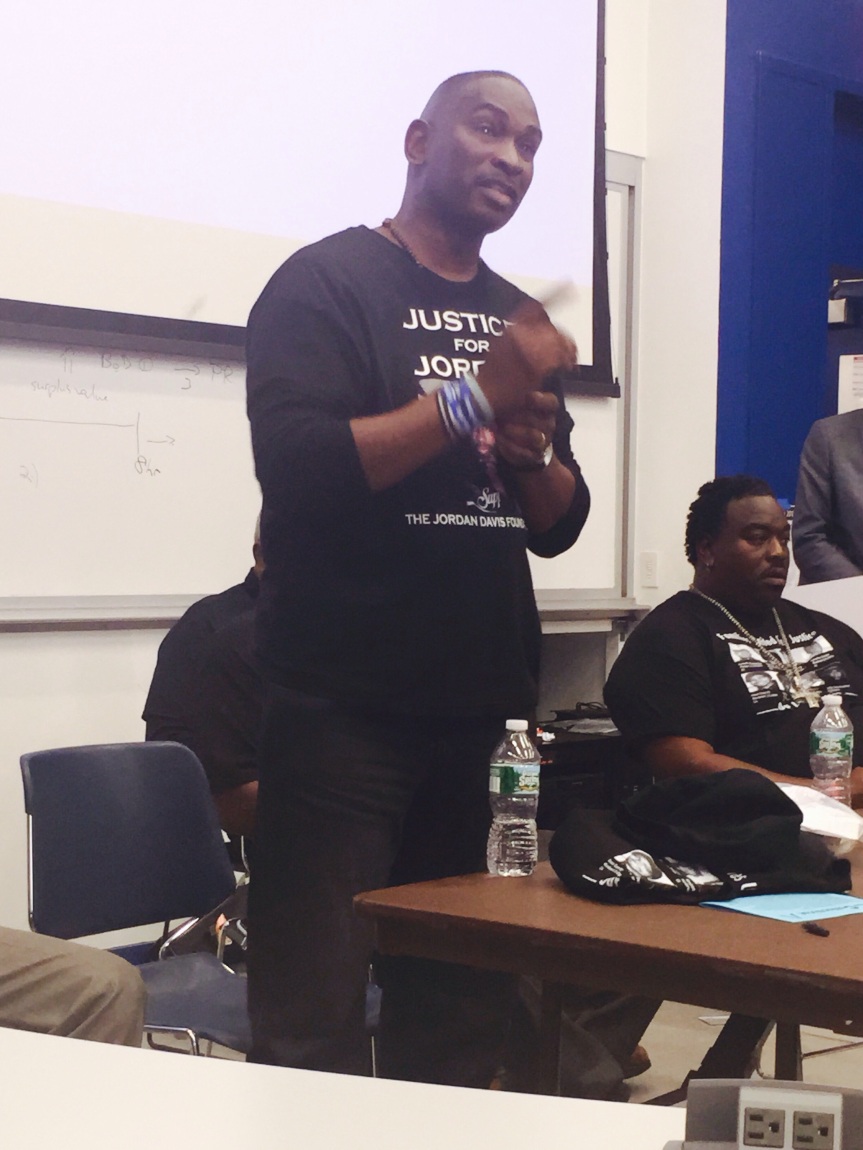