To help put a smile on the faces of mothers and children displaced, Tha Brown Urban Mother Partnership “Tha BUMP” and People Before Politics held a book and pizza holiday party. This party attracted the support of detectives from MVPD, MVFD, and an assistant principal from NYCDOE.

Beginning at 3:15 p.m., Cynthia Turnquest-Jones and Damon K. Jones parked in front of West HELP at 240 Franklin Avenue began to slowly organize the hall and foyer with books and pizza. Books titled “Small Steps” by Louis Sachar, “Peter and the Shadow Thieves” by Dave Barry and Ridley Pearson, and “A Series of Unfortunate Events” by Lemony Snicket for the upper grade readers. “My Animals Mis Animales” by Rebecca Emberley, “Rainforest Colors” by Susan Canizares and Betsey Cheesen, and “This Is Me” by Richard Scarry for mothers to read to their children or the lower grade reader were organized on the table.

The act of charity is the brainchild of Cynthia Turnquest-Jones, 44, founder of Tha Brown Urban Mother Partnership, who like many others, is always touched by mothers and children in need.

Cynthia said she and Damon decided to hold the book drive after visiting Mount Vernon High School for a “Stop the Violence” forum and noted that the English class they were presenting in was lacking chapter reading books for students to read independently at home. The incident brought to Cynthia’s mind those less fortunate to have their own books to enjoy text and build their vocabulary.

“What about the children in the shelters who don’t have nothing,” said Cynthia, “no books, not even a way to fall asleep with a smile.”

To help the cause Damon K. Jones called on community involved detectives Dave Clarke and Montika Jones who arrived with truck loads of brand new toys such as board games, a tricycle, Barbie dolls, a basketball, and action figures to name a few. They also had loads of coats which was certainly a surprise as well for Cynthia. Beautiful warm coats in all sizes for mothers and their children were available for them to try on and pick out their favorite one. Cynthia said, “when Assistant Principal Robert Ruiz spotted the flyer in her lesson plan book he joined the holiday party by donating soda and spent time serving the mothers and children.”

The residents of West HELP were allowed to select from the plethora of gifts. All left with more than one book, stomachs full, and warmth for the up and coming winter weather.

“It is more blessed to give than to receive” 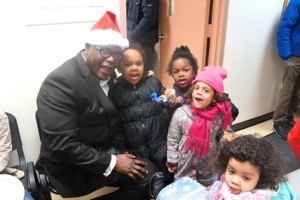 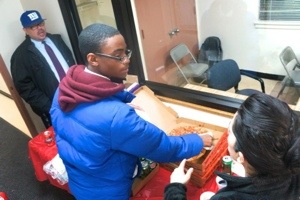 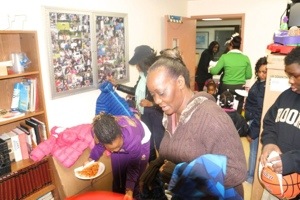 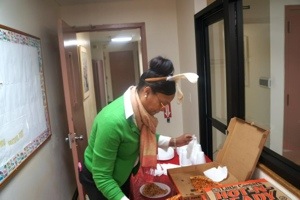