Which Side Are You On?

The line was extended around the corner on Adam Clayton Powell Jr. Blvd @ 116th Street., in Harlem, New York. The buzz “No Justice! No Peace!” The purpose of this evening was to build momentum for #RiseUpOctober which is supported by more than 60 families who were murdered by the police. Stopping Police Terror is the mission.

I sat with the Mother of Yusef Salaam (Central Park 5) “Sharonne Salaam”. Yusef Salaam was 15 years old when he, alongside four others, was wrongly accused of raping and assaulting a female jogger in Central Park. He spent seven years in prison and is one of many examples as to why stopping mass incarceration is a constant battle in the Black and Brown communities across America.

It is with urgency during these days of election season to note that Donald Trump made it his mission to get the Central Park Five behind bars for life. Trump said, “How can our great society tolerate the continued brutalization of its citizens by crazed misfits? Criminals must be told that their CIVIL LIBERTIES END WHEN AN ATTACK ON OUR SAFETY BEGINS!” That was quoted in the New York Times and his headline suggested what ought to be done with them:

BRING BACK THE DEATH PENALTY. BRING BACK OUR POLICE! Also, in early May, 1989, Donald Trump took out a full-page ad in the Daily News to say what he thought he knew about the case. Trump was on the front page of the papers often enough that season; the Post’s “SPLIT!” headline marking the end of his marriage would help fill the tabloid space between the teen-agers’ arrest and their conviction.

This particular event was hosted by Stop Mass Incarceration at the First Corinthians Baptist Church.

The Assistant Pastor Rev. Willie Francois III addressed all and noted that, “You can not say the name Jesus and not say the word Justice simultaneously. Now, God requires us to do justice. This means He is hungry for justice. We have starved God for too long and we need to begin giving God a drink.”

The church was transformed into a museum of slain sons and daughters. Large posters depicting a face, name, and date of death. Mothers, family, and friends sat in the front rows. As those who are interested in stopping police terror and murder crammed the church building bonds with like minded folks. Music and familiar chants from the protest played as we prepared to listen and become infused into straightening up our backs. Pastor, Rev. Stephen Phelps brought the house down when he said, “God hates it when people are sleeping and are shaken and refuse to wake up.” Breathtaking speakers who filled the air with intoxicating words. Bringing guest to their feet and fist in the air. “Fight The Power” which is a term used for ALL who believe in justice, freedom, and equality.

He was prosecuted as one of the Panther 21. He spent six years incarcerated at Leavenworth. He steps up to the mic and says “Power to the People”. Jamal Joseph prosecuted as one of the Panthers “Nothing has changed in the way that our Black & Brown boys are being treated.” Slavery which built this country. Built it because it was free labour. This idea that we are property is still strong. Police is here to protect property not Black & Brown people. This is an insane asylum.”

The Call Rise Up October 24 to STOP Police Terror—is signed by families of people killed by police, people from the arts, the faith community and activist movements—is for actions which are “resistance-based, uncompromising in spirit and, at the same time, pluralistic and diverse, involving thousands and thousands of people, reaching into every corner of this society and powerfully impacting the whole world.”

Also present was Marsha Coleman-Abedayo whistle blower leader for the Hands Up Coalition. She stated, “I do not know of any Black Mothers who’s Black Son’s are not terrorized by the police.”

Gina Bellafonte stood up and grabbed the mic. Four words… “I am Unapologetically Black.”

Carl Dix reminded us that, “The United States is dripping with blood. The police has killed over 700 people this year 2015.”Dr. Cornel West, “Words are too cheap when action is necessary. I am whom am because someone loved me. Stand there is a cross for you to bare. The Morality in this is constipated. 45% of our children in our US live in poverty. We were cross barring before we were flag wavers. 244 years of slavery and labour against the law for us to read and write. Against the law to study the bible without the supervision of the white man. Deniggeriizing our Black People! Stop laughing when it ain’t funny. Stop scratching when it don’t itch.” With 💕 Cynthia  #thabump #riseupoctober #nojusticenopeace 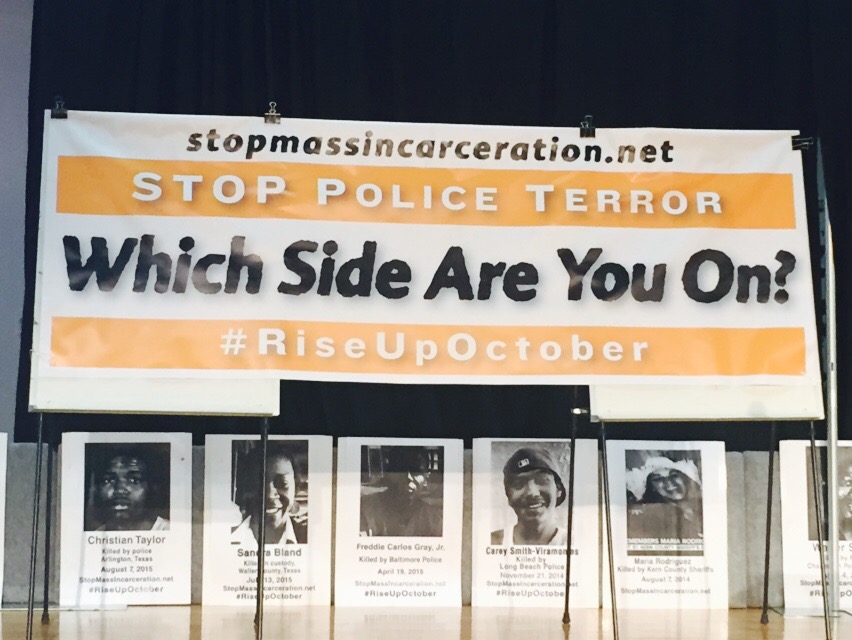 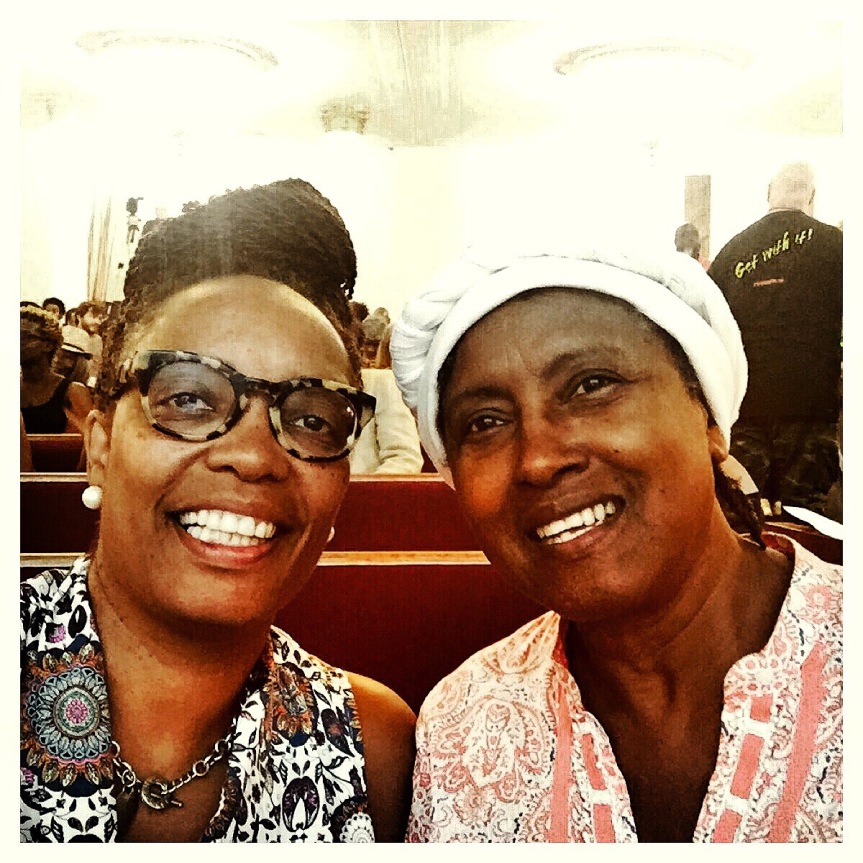 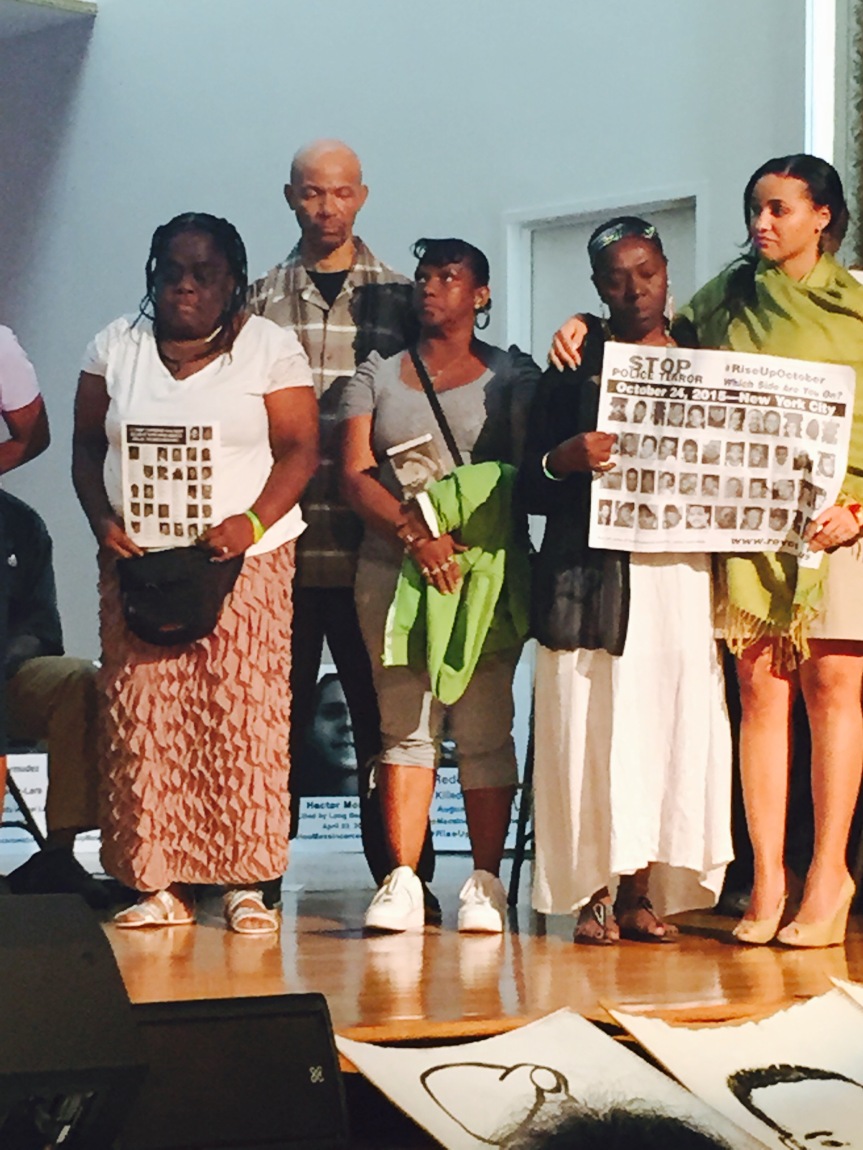 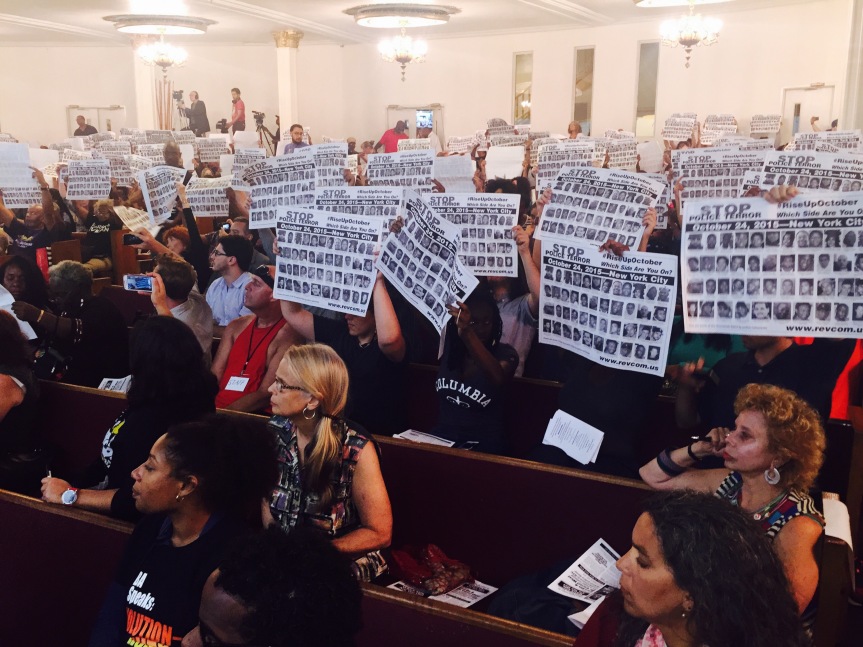 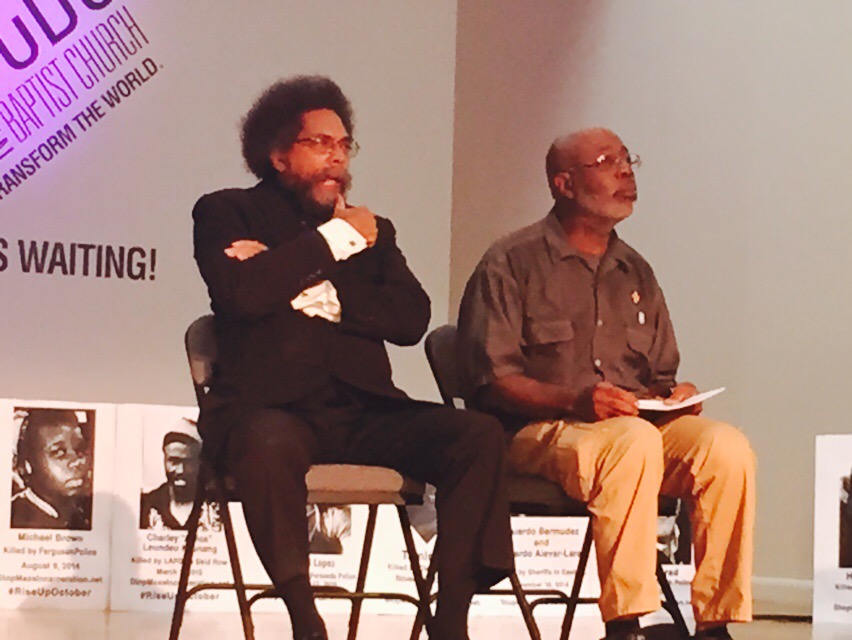 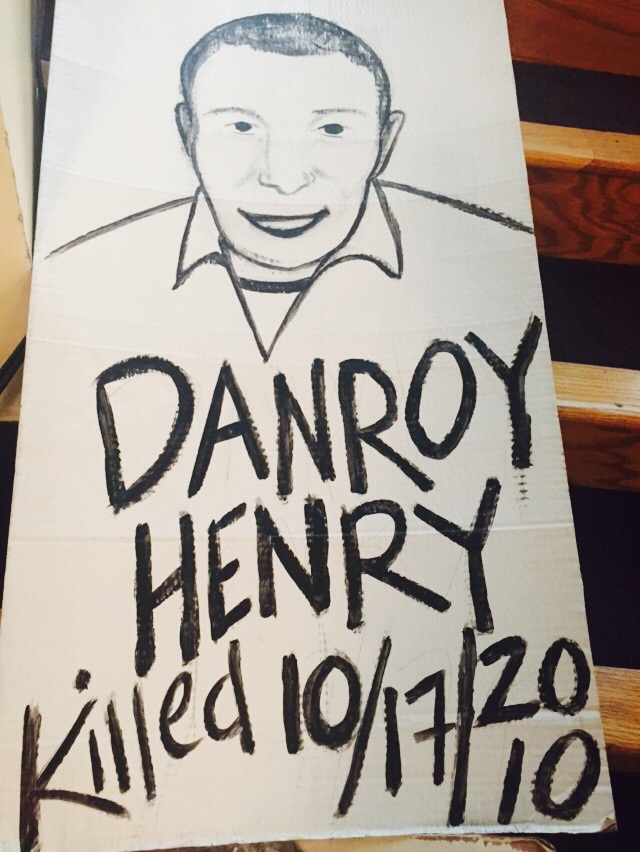 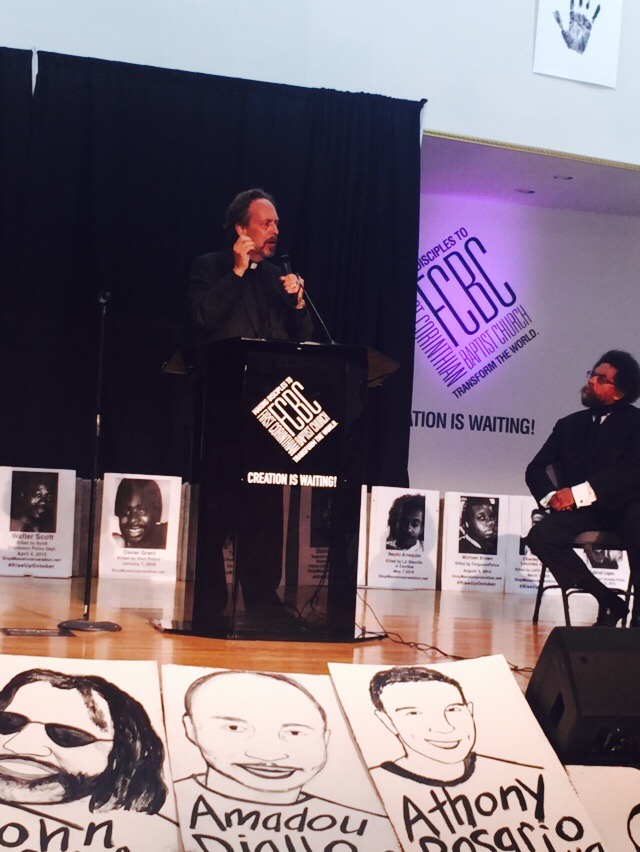 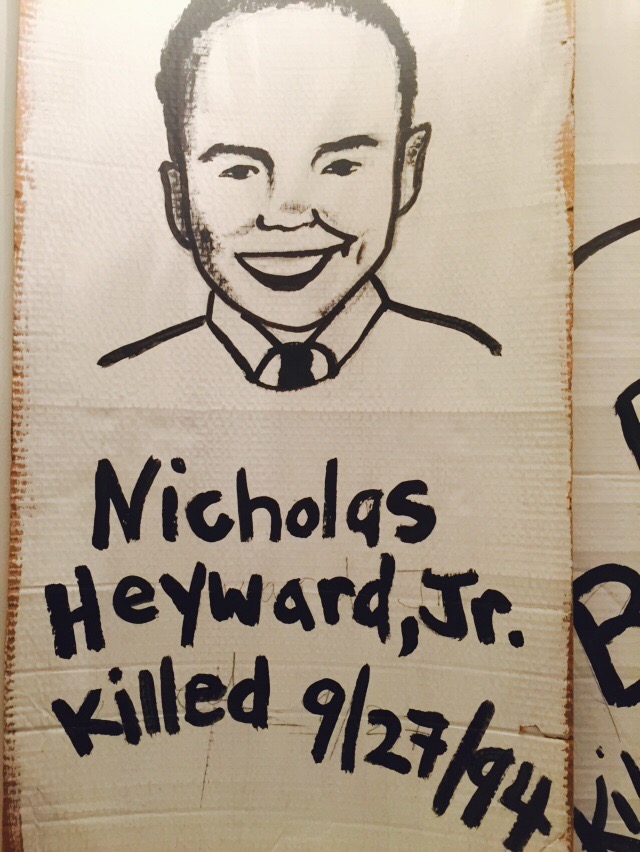 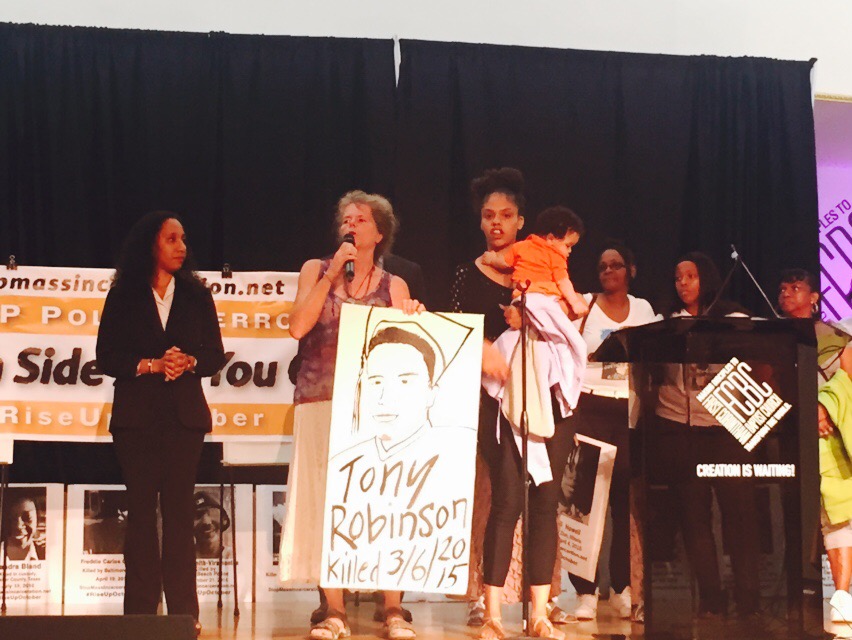 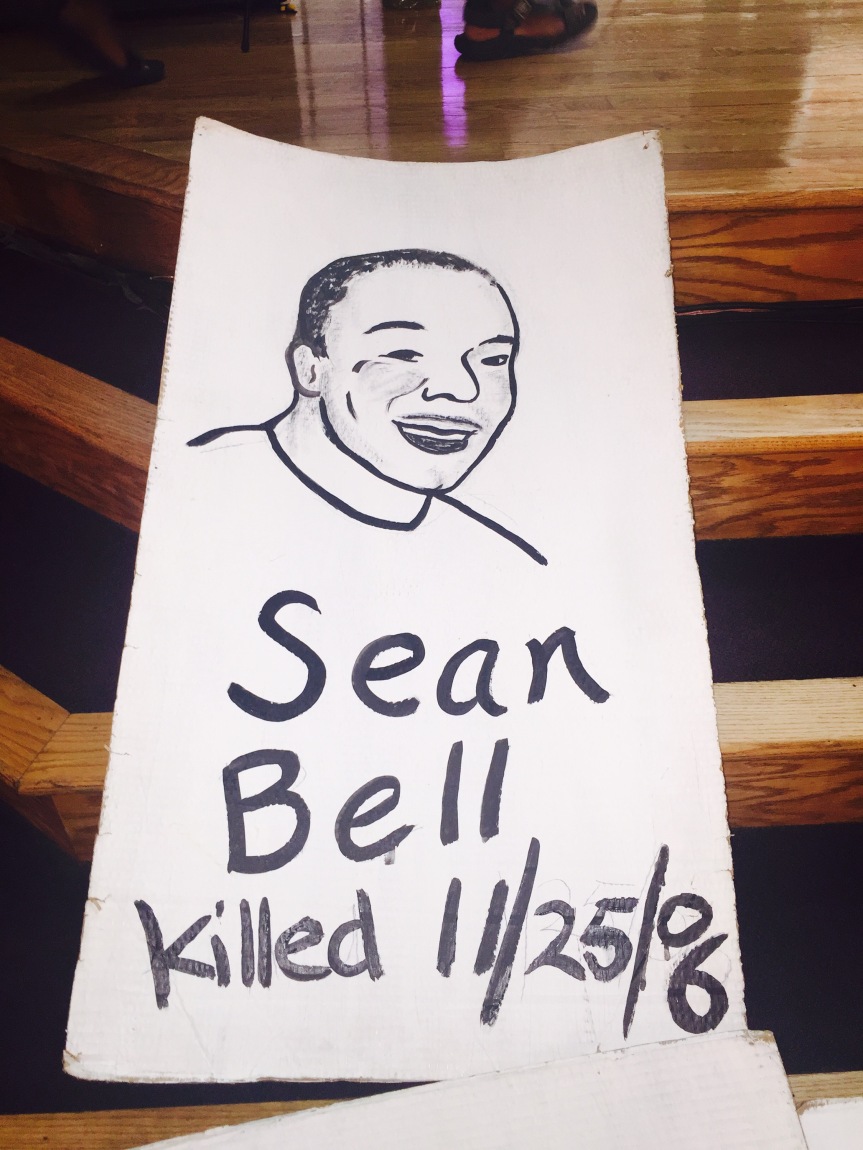 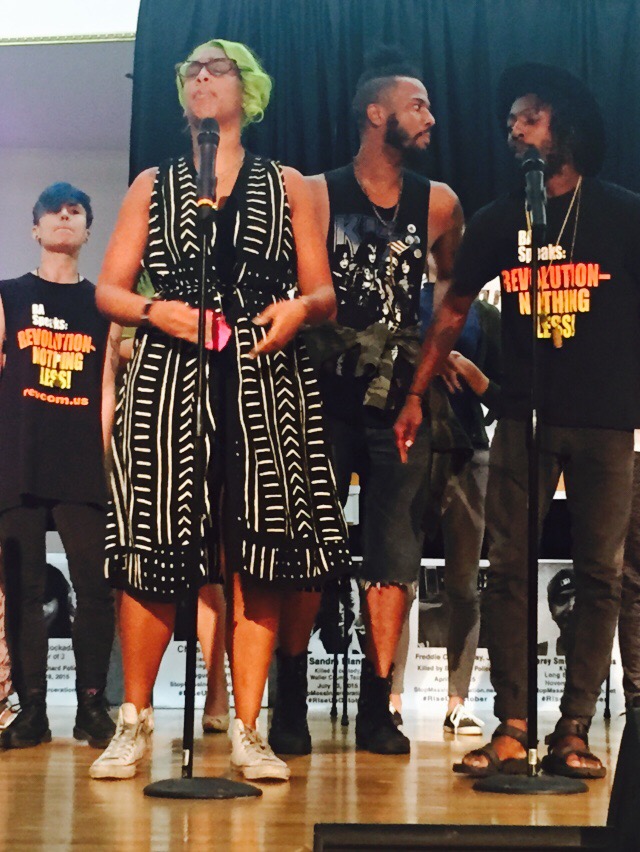